Wulingyuan: A few days in the mountains

Two buses and two trains took me to Wulingyuan, in Hunan province. The first bus took me from Yangshuo to Guilin, where I bought a train ticket to a city called Liuzhou. Only standing tickets were available, and after 15 minutes during which a kid pissed on the train floor next to me, I was offered a seat which seemed to be spare. The guy who offered me the seat had been staring at me since I got on the train, but so had everybody else - this is common in China. I'd already nick-named him Vince Vaughn in my head as he reminded me of the actor - he spoke a little bit of English and quizzed me for the three hour journey, and other passengers came along and he acted as interpreter to all of their questions. They don't seem to get many foreigners in these parts, I hadn't seen another one all day. I was even asked about my personal views and the UK's position on the disputed islands between China and Japan. I don't really have an opinion but decided to take the populist approach and declare my support for China. Vince was really friendly, and gave me his phone number and said I should call him when I get to Vietnam as he will be there running his restaurant - it was a kind gesture but I don't think I'll bother.

I arrived in Liuzhou and managed to buy a hard sleeper ticket for the onwards train to Zhangjiajie. I grabbed some food in the hour spare and managed to log onto a wifi network by guessing the password at the second attempt, it was 88888888, a lucky number in China, and a lucky guess for me. I took my bunk on the train and wasn't bothered by anyone. I enjoy sleeping on trains, the gentle swaying is like being in a crib, and the muffled clunking of rails becomes a mechanical lullaby of motion; I somehow find it comforting as it rocks me to sleep. I awoke as the train pulled into its terminus, and wandered out of the station building into cool mountain air which reminded me of the Alps, except the huge open square infront of the ticket hall had a strong communist feel to it. I managed to find a bus heading to Wulingyuan and my 20 hour journey was complete.

After checking in to my near empty hostel, I made my way to the park entrance and bought my three day ticket and took the cable car up to the mountain tops. The paths were fairly busy with dawdling Chinese tourists, all following their tour guides holding a limp little flag and annoyingly squawking through a tinny speaker draped from their waist. I cut through them, not really sure where I was heading, but the paths eventually led me to the cliff-top platforms with views across the mountains. The views were stunning. The landscape looked like a post-apocalyptic Manhattan, rows and rows of enormous columns reminiscent of skyscrapers, crooked and ragged with dare-devil trees growing on them. It's what New York will look like after World War Three and the humans are gone.

These are also the mountains that inspired the scenery for the film Avatar. I've not seen the film so I can't compare, but tacky Avatar merchandise was available on the stalls that can be found throughout the park. I had hoped to find some mist or low cloud hanging in between the karsts, but the air was dry and the skies were clear with high pressure over us, and so my limited meteorological knowledge suggested that I would not get exactly what I wanted. 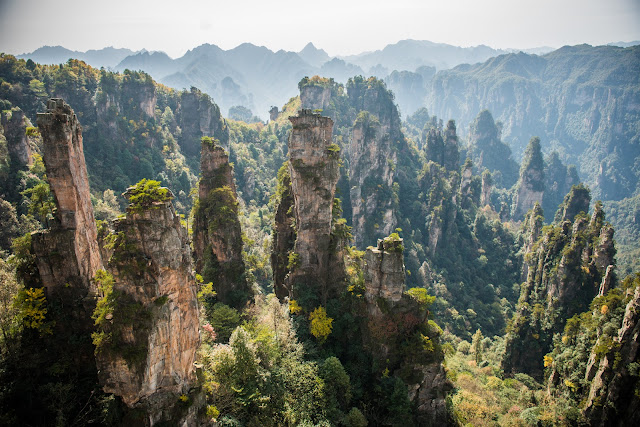 I spent about four hours or so walking along the paths, taking in the views, and when I spotted some steps hidden bu fallen leaves, leading off down a ravine, I decided to lead the official routes behind me and see where they led. The forgotten path took me through the forests of the mountain, and autumn had a firm grip here as golden leaves were falling and brown leaves were turning to mulch underfoot. The track wound round the base of a cliff, the top of which was clearly a viewing platform as on the forest floor were dozens of hats and camera cases, a graveyard of tourists belongings dropped from the top. 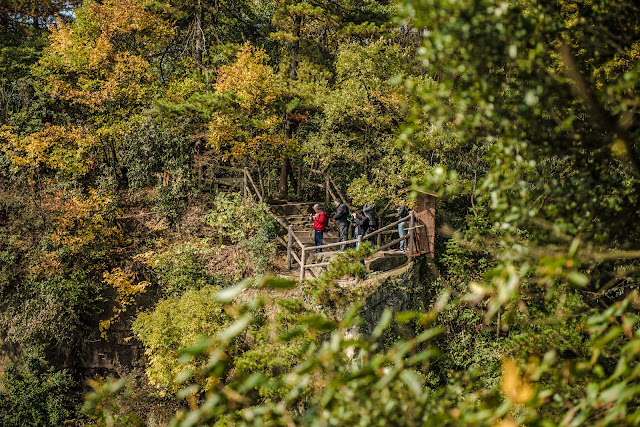 I followed the old path until it led me to an opening with a magnificent view. I was alongside one of the upright rocks, and cautiously edged along a ledge, until I dare go no further. I was stood with my back pressed up against bare rock, with a certain death fall below me and a view that could rival almost any other. I couldn't hear the packs of Chinese tourists, many of whom enjoyed yelling off the cliffs at the top of their lungs, even 50 year old men and then giggling like school boys, I just tutted and quietly shook my head like some old bore whenever I saw it. I was alone. I thought if I fell no one would know of my disappearance for days, and my broken body wouldn't be found for God knows how long. Happy thoughts. I decided to head back to safer ground, my knees now a little wobblier than before, but of course I made it or I wouldn't be telling the tale here. 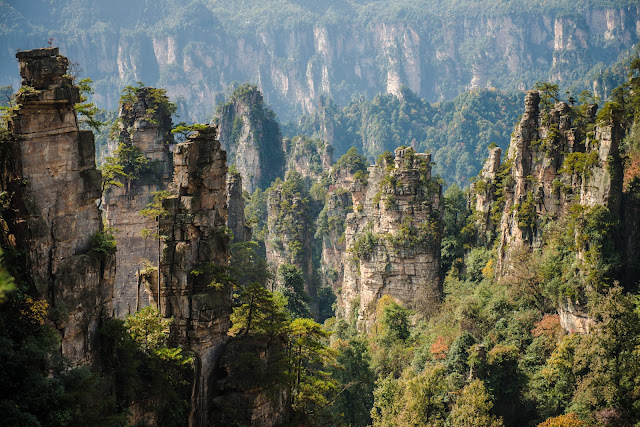 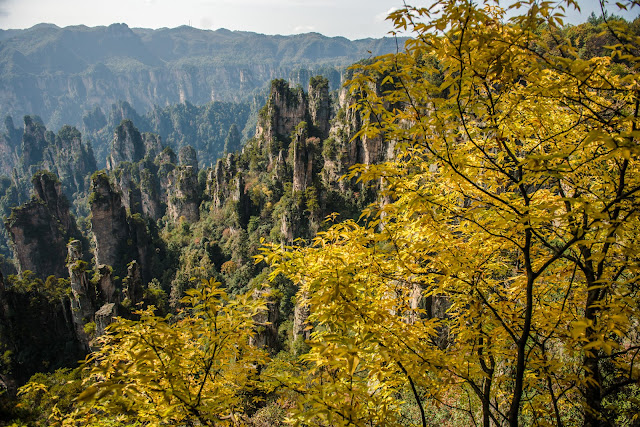 I walked back up to the main routes and joined the crowds again. I began to get a little bored, I hadn't spoken to anyone all day and although the views were spectacular, they were unchanging and I'd about had enough. A pretty Chinese girl approached me and wanted to take my picture with my camera. I let her. She only spoke basic English but she was giggly and it seemed she fancied me. This was nice. We spent a little while talking the most basics and she followed me around a bit, before she plucked up the courage to ask for my phone number. I couldn't imagine what she would say when she called, she wasn't really at a conversation level, so I gave her my email address and said goodbye, and took the bus back to the cable car to head back to town. She hasn't yet emailed.

That evening I went to try and find some food in town. I went in a few of the restaurants but the menus were only in Chinese with no pictures, so they're impossible for me to order from. I walked around and lots of places had boxes of frogs and eels outside, as well as birds and rabbits in small cages, and piles of greasy duck heads on trays in windows. They look like pet shops but it's in fact dinner, and keeping animals alive is cheaper and more efficient at keeping things fresh than refrigeration. One place even had a cat and an enormous bat strung up, the carcasses were dry and didn't look edible (if they could be at all), so maybe they were good luck charms, or left overs from Halloween. Though this is China so it's probably a delicacy. I failed to find food so ended up in a brightly lit bakery. These places look nice, but the food isn't great. The breads are far too sweet and what I thought was chicken on bread was gristle and cartilage, so I spat it out and drank my espresso from a large cup, as they didn't know what I meant when I asked for just a black coffee. Ordering the coffee was difficult enough, they spoke English but didn't understand the concept of just a black coffee, as the menu only had cappuccinos and so on, so I almost had a bit of a Larry David moment.

The following day I went back up the mountains, the weather had changed, the skies were grey and it was a bit damp. I was hoping I would get the picture I wanted. I went a different route this time. Rather than the cable car I took the free bus through the park to the elevator - a lift that runs up the side of one of the cliffs, something akin to a baddy's lair from James Bond. I explored the paths and the scenery was much the same, and although the visibility wasn't as clear as the day before, I didn't have white clouds shrouding the bases of the peaks in mystery. I had my iPod for company this time and walked around for hour on my own, the only conversations I had were with a few retired couples. They looked Chinese but one set was from Los Angeles and the others from Singapore, and I enjoyed having an interest shown in me. Later on in the afternoon I took the bus back around to the side of the park I had been in yesterday, to see if there were any of the clouds I so desired in that valley, but it was the wrong weather system and I wouldn't get what I wanted. I followed the path back down away from the main trails at to the ledge I had visited yesterday for a bit of peace and quiet, and to take a photo of myself there as I'd forgotten to it it yesterday.
That evening I met three French girls staying in my hostel. I'd just sat down to edit pictures as they invited me out for dinner. I said I'd follow along and find them in town in a bit, the town not being that big and with almost no foreigners there they should be easy to find. I'd almost given up looking for them when I spotted them at a table inside a restaurant down a side street, so joined them for a few beers before we got some street food of fried rice and vegetables to eat back at the hostel. They were good company and spoke good English, and I got to practice a little of my terrible French, chipping in in their native tongue when I could. They had an early start so went to bed quite early, so the remainder of my time in Wulingyuan was spent watching episodes of American televisions series on my laptop.

Email ThisBlogThis!Share to TwitterShare to FacebookShare to Pinterest
Labels: Railways to the East: Peterborough to the Pacific

Ben Davis
Award winning press photographer, backpacking my way from the UK to as far as trains, ferries and money will take me.